What is a standing committee?

Standing (or permanent) committees carry out much of the detailed work of the Legislative Assembly. They also help to ensure accountability and a balanced approach to decision-making by giving members other than the premier and Cabinet ministers an opportunity to review and report on the government’s work: for example, departmental business plans, budgets, and bills. Standing committees do not develop bills or budgets, but they often cause changes to be made to the government’s drafts.

Bills are new laws that are being proposed by the government (except in the case of Private Members’ Bills) and considered by the Legislative Assembly. Some bills are to create entirely new laws; for example, the Northwest Territories Hydro Corporation Act. Other bills make changes to laws that already exist; for example, An Act to Amend the Territorial Parks Act.

What is the purpose of public hearings?

After a bill is read for the second time in the Legislative Assembly, it is usually referred to a standing committee. It is the job of the standing committee to give members of the public a chance to say what they think about the bill before it becomes law. After receiving presentations and written comments from the public, the committee has an open meeting with the minister who sponsored the bill, and often uses that time to follow up with the minister on questions or concerns that came up in the hearings. The committee considers everything it’s heard and makes a report back to the Legislative Assembly. This sometimes includes recommendations to make changes to the bill.

What is involved with presenting to a standing committee?

If you have something to say about a bill that is before a standing committee, you can make a presentation to that committee. The presentation can be written (a letter or an e-mail) or can be oral (you can speak at a public hearing). Both types of presentations are considered equal by the committee. If a committee is coming to your community, you can sign up with the clerk ahead of time to make sure you have a spot to speak at the hearing, or you can just show up at the hearing and ask to speak. If you want to hand in a written presentation as well, you can give it to the clerk.

For more information on the Standing Committees of the 19th Northwest Territories Legislative Assembly, please visit the 'Committees' webpage, or contact LA_PAC@ntassembly.ca. 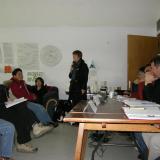