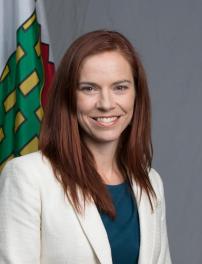 Caroline Wawzonek was elected to the 19th Northwest Territories Legislative Assembly to represent the constituency of Yellowknife South. Ms. Wawzonek was also elected as a Member of Cabinet.

Ms. Wawzonek was born in Calgary, AB and has called Yellowknife home since 2007.

Ms. Wawzonek obtained a Bachelor of Arts degree from the University of Calgary in 2000 and obtained a law degree from the University of Toronto, Faculty of Law in 2005. During the course of her studies, Ms. Wawzonek was awarded scholarships and bursaries to participate in language studies in Harbin, China and Taichung, Taiwan as well as to undertake legal internship opportunities with the People’s Recovery Empowerment Development Assistance Foundation in Olongopo, Philippines and with REDRESS Trust in London, England.

Upon being called to the Law Society of the NWT, Ms. Wawzonek started her own criminal law practice and appeared at all levels of court in the NWT. Ms. Wawzonek’s criminal law practice brought her to communities across the territory as she travelled regularly on circuit court. After five years of solo practice, Ms. Wawzonek joined the law firm of Dragon Toner and practiced in general litigation until becoming a candidate in the election for the 19th Assembly.

Since 2007, Ms. Wawzonek has undertaken numerous leadership roles within the legal community, including as a member of the Territorial and Supreme Court Bench and Bar Committees, the Domestic Violence Treatment Option Court Steering Committee, and the Wellness Court Steering Committee. She was also President of the Law Society of the Northwest Territories (LSNT), a section chairperson for the Canadian Bar Association Northwest Territories Branch (CBA-NT), and a Committee Member of the LSNT’s and CBA-NT’s Joint Truth and Reconciliation Working Group and Access to Justice Working Group.

Within the Yellowknife community at large, Ms. Wawzonek held appointments to the Legal Aid Commission, the Income Support Appeal Committee and the City of Yellowknife’s Social Issues Committee. Ms. Wawzonek was also a Director at the NWT YWCA and at AVENS, Chairperson for the NWT Montessori Society and was the Secretary of the Northwest Territories Chamber of Commerce.

In 2017 Ms. Wawzonek was a recipient of a national award celebrating Canadian Women in Law.

Ms. Wawzonek and her spouse have two children. In her spare time, she enjoys running, paddle-boarding and cross-country skiing.