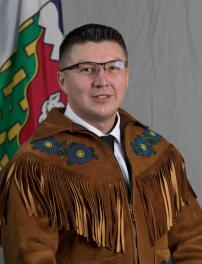 Speaker of the Legislative Assembly

Board of Management - Chair
Caucus - Member

Mr. Blake was born in Inuvik in 1977 and has lived in Tsiigehtchic for the last 25 years. He completed Grade 11 at St. Joseph’s Composite High School in Edmonton and participated in leadership training at Lethbridge College and Negotiation Training in Banff, Alberta.

Over the last few years, Mr. Blake volunteered for the Mackenzie Jamboree in Tsiigehtchic and the Annual Canoe Days. He also took students on the land for day trips, and participated in hand games with youth in Tsiigehtchic.

Mr. Blake’s parents are Grace and Frederick Blake; his grandparents are Frederick and Elizabeth Blake, and Dale and Rose Clark. Mr. Blake’s common-law wife is Jamie Benoit-Cardinal, and together they are raising their family in Tsiigehtchic.