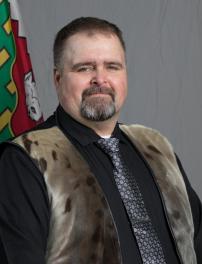 Jackie Jacobson was elected to the 19th Northwest Territories Legislative Assembly as the Member representing Nunakput.

Mr. Jacobson is proud of his Inuvialuit heritage and is a lifelong resident of Tuktoyaktuk where he was raised by his Anaanak and Ataatak Bella and Jimmy Jacobson.  Mr. Jacobson graduated high school in Inuvik, NT.

Mr. Jacobson has been an active member of Tuktoyaktuk over the last 25 years, serving on the Hamlet Council as the Mayor for two terms and as a Hamlet Councilor for two terms. He served as the secretary/treasurer of the Tuktoyaktuk Community Corporation for eight years, as a community recreation board member for three years, and as the Chair of the Tuktoyaktuk Housing board for four years. In addition, Mr. Jacobson served for six years as both Member of the Board and as the Chair of the Inuvialuit Development Corporation, and Chair of the Human Resources Board with Norterra.

Mr. Jacobson has raised and raced dog teams throughout his life and continues to pass this tradition onto his family.

Mr. Jacobson enjoys spending time on the land, hunting and fishing, and currently lives in Tuktoyaktuk, NT.  Mr. Jacobson has been married to his loving wife, Jenny, for 25 years. Together they have a family of 6 children, 1 grandson and 4 foster children.