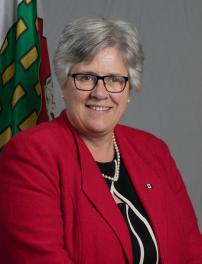 Ms. Green has lived in Yellowknife since 2000. She lives downtown, which is also the location of McKenna Funeral Home, the family business. She previously lived in Happy Valley-Goose Bay, Labrador, and has held driver’s licenses in six Canadian provinces and one territory.

Ms. Green spent 16 years reporting for CBC including on the proposed Mackenzie Gas Project and the development of diamond mines in the territory. She was also a contributor to Far North Oil and Gas Review, which later became Up Here Business.

Ms. Green left CBC in 2009 to focus on advocating and fundraising for services centered on women, families and children in need at the YWCA Yellowknife. Working with representatives from the GNWT, Indigenous governments, municipal government and the business sector, she helped create the anti-poverty strategy and action plan, Building on the Strengths of Northerners.

In 2012, Ms. Green became a consultant, providing fundraising and communications services to a variety of non-profit organizations. She also served as a volunteer on the boards of the United Way NWT, NWT Community Services Corporation (Northern United Place), Yellowknife Housing Authority and on the City of Yellowknife Social Issues Committee.

Ms. Green is married and has one grown daughter.