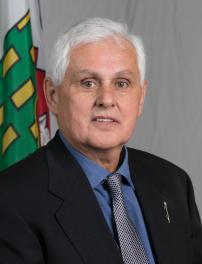 After graduating from Diamond Jenness Secondary School in Hay River, Mr. Simpson went on to attend and receive a Diploma in Petroleum Engineering Technology from SAIT in Calgary. Mr. Simpson also earned a Bachelor of Science in Computer Science (Montana Tech) and a Bachelor of Science in Business (Montana Tech.), as well as a Bachelor of Laws from the University of British Columbia and is a member of the Law Society of the NWT and the Alberta Society of Engineering Technologists. Recently, Mr. Simpson received his Journeyman Red Seal Certification as a Mobile Crane Operator.

Mr. Simpson is married to Bette Lyons and together have three children and one granddaughter. Mr. Simpson’s son, RJ, is also a sitting Member of the 19th Legislative Assembly.