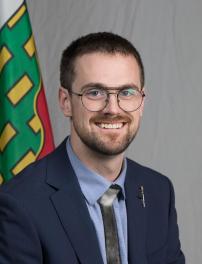 Rylund was born in Summerland, British Columbia and made Yellowknife his home in 2015.

With a Bachelor of Arts in Political Science and a law degree from the University of Victoria and a history of advocacy and community organizing, Rylund has been preparing for politics for a long time.

Rylund came to Yellowknife as a student for the federal Crown Prosecutor, and then went on to practice law at Dragon Toner Law Office, and the territorial government’s Department of Environment and Natural Resources.

In 2019, he began making a living as a tourism operator and dove into his passion for working with his hands as a co-founder of YK Makerspace.

A committed community-builder, he has also served as ticketing manager for Folk on the Rocks, Chair of the Canadian Bar Association’s Aboriginal Law Section – NWT, and Vice Chair of the organization’s public lawyers’ section.

Rylund and his partner Kristel can often be found sipping coffee on the rooftop deck of his houseboat — the Scandimaniac.