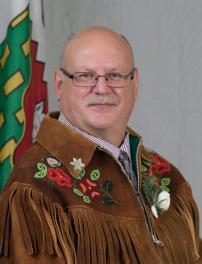 Minister of Environment and Natural Resources

Minister of Municipal and Community Affairs

Shane Thompson was re-elected to the 19th Northwest Territories Legislative Assembly representing the constituency of Nahendeh.

Mr. Thompson was born on July 11, 1963, in Hay River. He has lived in Kugluktuk (Coppermine), Inuvik, Hay River, and in Edmonton, while at the University of Alberta. Fort Simpson has been his home since 1992.

Mr. Thompson previously served two terms (three years each) as an elected official with the Fort Simpson District Education Authority, spending the last four years as the chairperson. Over the past 35 years, he has served on various community and territorial boards.

Mr. Thompson was employed as the Senior Sport and Recreation Coordinator with Municipal and Community Affairs (GNWT) in the Deh Cho region before being elected as a Member.

Mr. Thompson is an active volunteer with Northern Youth Aboard, CBET and Fundamental Movement, and HIGH FIVE®. As well, he is a past member of the Sport North Federation Board, NWT Softball and of NWTRPA, and the past president of Seven Spruce Golf Course.

Mr. Thompson is the father of seven children - five daughters and two sons – and has eight grandchildren.