Creation of a New Northwest Territories

On April 1, 1999 a new Northwest Territories was created when new boundaries were drawn in Canada’s North. Two new territories, a new NWT and Nunavut (which means “our land” in Inuktitut), were created. This change marked the first significant change to the map of Canada since Newfoundland joined Confederation in 1949.

The motivation for creating two new territories in Canada’s North stemmed from the people of Nunavut’s desire to have their own government, one that is closer to the people and more culturally based including the use of Inuktitut as the working language of the new government.

Dean A.W.R. Carrothers was appointed by the federal government to head up a commission to study the development of government in the Northwest Territories. After the completion of the study in 1966, the Commission recommended that the NWT should not divide into two territories.   This slowed the discussion of the issue for a few years.

In 1976, the issue was re-ignited when the Inuit Tapirisat of Canada (the main political Inuit organization of the time) proposed the creation of Nunavut as part of the comprehensive Inuit land claim settlement, including the Inuvialuit area of the Beaufort Sea. Later that year, due to development pressure in their region, the Inuvialuit split from the ITC and pursued their own land claim.

That same year, a federal electoral boundary commission recommended two electoral districts for the Northwest Territories: Nunatsiaq and the Western Arctic. The recommended changes were in effect in time for the 1979 federal election.

Over the next 12 months, many groups submitted suggestions as to where a dividing line could be drawn if the NWT were to separate into two territories. The Dene Nation (the organization representing Dene in the western part of the Northwest Territories) proposed dividing the NWT into three territories. The Métis Association suggested extending the Manitoba/Saskatchewan boundary northward. At the end of 1977 the NWT Inuit Land Claims Commission made a recommendation to the Federal Government that a new territory and government called Nunavut be established.

In 1981, MLAs agreed to put the division question to the people of the NWT. Voters were asked, “Do you think the Northwest Territories should be divided?” The plebiscite on dividing the NWT was held on April 14, 1982 and 56.6 per cent of the voters supported the idea, with the vote in Nunavut being very high in favor. Over the next 10 years the Federal Government announced its support of Nunavut, boundaries were agreed to and then disagreed upon, and a boundary plebiscite was called and canceled. In February 1992, the Executive Council set May 4 as the date for Northerners to vote on a proposed boundary, known as the Parker line, for creating two new territories.  A slim majority supported the proposed boundary with high voter turnout in Nunavut and considerably lower turnout in the West.

In November 1992, the Inuit overwhelmingly approved the Nunavut Final Land Claim Agreement and took a huge step towards realizing their dream of the new territory of Nunavut and their own government. Prime Minister Brian Mulroney, Northwest Territories Government Leader Nellie Cournoyea, and Tunngavik Federation of Nunavut President Paul Quassa signed the deal in Iqaluit in May 1993. Tunngavik Federation of Nunavut was the organization that negotiated the Inuit land claim and has since been replaced by Nunavut Tunngavik Incorporated.

Members of the 13th Legislative Assembly and the Government of the Northwest Territories (1995-1999) were responsible for the overwhelming task of establishing two new territories. Some tasks included passing legislation to allow for the creation of the new territories and transferring responsibility for programs and services to the new Nunavut Government in time for April 1st, 1999. 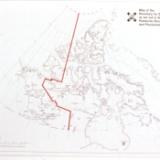