History of the Legislative Assembly

This video produced in 1990 by the Inuit Broadcasting Corporation, which is outdated now, still overs a fascinating look at NWT's history.

The Northwest Territories Act (NWT Act) had provided for a four-member appointed Council to assist the federally appointed Commissioner but no members were named to the Council until 1921. All were federal civil servants living in Ottawa. The appointed Council acted more as an interdepartmental committee than as a legislative body.

No Northerners were named to the Council until 1947, when J.G. McNiven of Yellowknife was appointed. In 1951, there was a tentative return to representative government when the NWT Act was amended to permit three elected Members from the Mackenzie District to join five appointed Members. The Council began to alternate sittings between Ottawa and Northern communities.

By 1966, elected Members formed a majority on the Council with seven elected and five appointed. The first elected members from the eastern Arctic, including the first Inuit Member, took their seats.

By this time, political awareness in the North had increased and there was strong dissatisfaction with the system. The Territorial Council asked for an inquiry into the North’s political future and, in 1966, the Carrothers Commission, with former Commissioner John H. Parker as a member, submitted its report after traveling across the Territories to talk to residents.

Most of the Commission’s recommendations were accepted by the federal government early in 1967 and formed the basis for a gradual return to responsible government. The seat of government was moved from Ottawa to Yellowknife, a resident civil service was developed, Ottawa devolved many provincial-type responsibilities and the NWT Council began to move towards becoming a fully elected Legislative Assembly.

By 1970, only four federal appointees remained on the 14-member Council. Amendments to the NWT Act allowed Council to decide the qualifications of electors and its Members, to set their indemnities and to develop a separate Consolidated Revenue Fund. By 1975, a standing committee system had developed and the Standing Committee on Finance was given the right to scrutinize the territorial budget.

In 1975, the first fully-elected Council since 1905 took office. Dene, Métis and Inuit Members were the majority on the 15-seat Council. The Council, which was referred to as the Legislative Assembly after 1976, chose its own Speaker and named two members to the Executive Committee. The Commissioner no longer presided over Assembly sessions, as had been customary in earlier Councils. The 8th Assembly amended the Council Ordinance and lobbied the Federal government for authority to set the number of constituencies between 15 and 25. The number was subsequently set at 22.

The Assembly created a Special Committee to review education in the NWT and at the same time a plebiscite was held on the question of dividing the Northwest Territories. Members played an active role in reviewing the territorial budget and in setting spending priorities. The first territorial Finance Minister was appointed and presided over the preparation of budgets. The Assembly lobbied strongly for the protection of Indigenous rights in the new Canadian constitution, traveling to Ottawa en masse, and received approval-in-principle from the federal government for division of the Northwest Territories.

The Assembly accepted an electoral district boundaries commission report recommending that two of the larger constituencies be divided to create a total of 24 ridings. Territorial voters went to the polls on November 21, 1983 to elect 24 Members to the 10th Legislative Assembly. It met for the first time in Yellowknife in January 1984. During the 10th Assembly, Commissioner Parker announced he would no longer sit with elected Members in the House or participate in debates as one step toward fully responsible government.

On January 30, 1986, Commissioner Parker turned over chairmanship of the Executive Council to the Government House Leader and transferred responsibility for the Public Service to the Executive Council. The 10th Legislative Assembly was dissolved in 1987 and an election was held on October 5, 1987 to choose the 24 Members of the 11th Legislative Assembly.

After their first session, Members of the 11th Assembly elected an Executive Council, or Cabinet, with a majority of Ministers of Indigenous descent.

The Legislative Assembly also gave the new Government Leader authority for the overall management and direction of the Executive branch of government and the right to take any disciplinary action he or she deemed necessary with respect to the conduct of Ministers.

The first order of business for Members of the 12th Assembly was to elect a Speaker. For the first time, this process was done in public. The public also had the chance to view the election of the Government Leader and the Members of the Executive Council.

In February 1994, Members passed a motion officially changing the title of Government Leader to Premier.

The 24 members of the 13th Legislative Assembly were chosen in an election on October 16, 1995. Again the election of the Speaker, the Premier, and the seven Cabinet Ministers were held in a public forum. A new Premier was elected in December 1998, following the resignation of the former Premier.

On February 15, 1999, 19 Members were elected to serve on the first Nunavut Legislative Assembly. However, Members were not sworn in until April 1st.

On April 1, 1999 two new territories, Nunavut and a new Northwest Territories, were created in Canada’s North. The 19 Members elected in Nunavut officially took office. In the NWT, the 14 western Members of the 13th Legislative Assembly remained in office.

In July 1999, Members agreed that 19 Members would be elected on December 6th, 1999 to the 14th Legislative Assembly of the Northwest Territories. 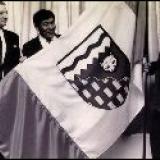 The unveiling of NWT's flag