Our Building - The Legislative Building of the NWT

Home of the Legislative Assembly

During construction, prime importance was placed on maintaining the natural landscape surrounding the building - the trees, the rock outcrops, the peat bog foreground and the lakeshore. The Capital Site Area, which includes the Legislative Assembly building, the Prince of Wales Northern Heritage Centre, and City Hall, is representative of a variety of northern ecosystems. The foreground to the Legislative Assembly Building is a large, expansive peat bog abundant with native wildflowers and grasses. Black spruce, tamarack and white birch trees continue to flourish near the walkway to the Legislature’s entrance. To the west and north, the Precambrian shield meets the edge of the lake. Small mammals, birds and waterfowl continue to inhabit the area, as they did before the Legislative Assembly was constructed.

Territorial architects Ferguson Simek Clark/Pin Matthews in association with Matsuzaki Architects Inc. of Vancouver designed the 46,000-square-foot building. Construction of the building began in 1990. The building is anchored to the ground by a wall of indigenous stone. The walls are clad in both sheet and cast zinc panels, lightly tinted with green glazing. Zinc shingles cover the domed roofs and form the undulating roof edge. Zinc louvers with operable panels provide natural ventilation to each office. The zinc material was selected because it was mined in the North and because of its subtle weathering qualities.

As visitors enter the building, they are welcomed by the Great Hall.  It is a spacious public meeting area, which is well lit thanks to the tall windows.  From here, visitors can enjoy a view of Yellowknife’s downtown.

The wood in the building is primarily white maple with sycamore added in the Chamber, on Members’ desks and in the Speaker’s office. The primary focus of the building is the Chamber, announced by the shallow dome, which floats gently over adjacent treetops. Its circular shape represents both the cultural traditions of northern people and their unique form of consensus government.

Secondary in importance is the Caucus meeting room. The Caucus room, with its unique acoustical qualities, provides space for a full seating of the MLAs. Offices for Members and staff radiate out from the Chamber and Caucus room and each has its own distinct view of Frame Lake.

Artists from across the NWT were invited to submit proposals to work in collaboration with southern glass and zinc artisans. Letia Lewis of Yellowknife and John Farcey Jr. of Fort Providence were selected to work on the zinc wall behind the Speaker’s Chair.

Throughout the building, natural light filters through the skylights surrounding the perimeters of the Chamber and Caucus Room. Glass partitions used to separate these areas offer an excellent opportunity to present northern artistic themes, rendered directly on the glass. Warren Carther of Winnipeg and Angus Cockney of Yellowknife worked on the translucent glass frieze that diffuses the natural light coming into the Chamber, leaving occupants conscious of the changing daylight conditions outside.

The building contains the offices of the Speaker, the Premier, the Executive Council, Regular Members and their support staff. In addition, there are meeting rooms and public spaces to facilitate contact between MLAs, constituents, organizations and the people of the NWT. 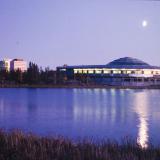