What is Consensus Government?

The Northwest Territories is one of only two jurisdictions in Canada with a consensus system of government instead of one based on party politics. In our system, all Members of the Legislative Assembly (MLAs) are elected as independents. Shortly after the election, all Members meet as a Caucus to set priorities for that Assembly. The Caucus remains active throughout their term as the forum where all Members meet as equals.

Members who are not in Cabinet are referred to as Regular Members. They become the “unofficial opposition.” They are responsible, through questioning in the House and the work of standing committees, for holding the government accountable and responsive to the people of the Northwest Territories.

Compared to the party system, there is much more communication between Regular Members and Cabinet. All legislation, major policies, and proposed budgets pass through the Regular Members’ standing committees before coming to the House. This gives Members a chance to make changes and put their “fingerprints” on initiatives before they’re made public, unlike in other systems. This influence comes at a price for Regular Members: they often get advance notice of announcements and issues before the public does, but can’t tell their constituents.

The 11 Regular Members also hold the balance of power, as only seven Cabinet Ministers are elected. A Cabinet that ignores the direction favored by the majority soon runs into trouble. Even so, consensus government does not mean that unanimous agreement is necessary for decisions to be made, motions passed, and legislation enacted. A simple majority carries the vote.

Election of the Speaker, Premier, and Ministers

Once elected, Members hold a territorial leadership meeting at the Legislative Assembly in Yellowknife. The first order of business is the election of the Speaker by secret ballot. This reflects the importance of the Speaker, who presides over the Assembly as a whole and enforces the rules.

The next task is electing the Premier. Members have many discussions behind the scenes as candidates measure their support leading up to the election, which has been held in public since the 12th Assembly. Candidates are nominated and given 20 minutes to present their platforms. Then the floor is opened for a limited number of questions from each Member, and a secret ballot vote is held. Sometimes it takes several ballots before any candidate receives more than 50% of the votes.

The election of six more Cabinet ministers comes next. Again candidates are nominated and outline their platforms in public before a secret ballot vote takes place. After meeting with their team of ministers, the Premier assigns them to head up one or more departments.

Some Members choose not to accept nominations to Cabinet because they prefer to be free to ask tough questions of ministers in the House and before standing committees. They feel they can better represent their constituents as Regular Members.

It rarely happens, but the Premier and/or Cabinet ministers can be removed by the passing of a motion of non-confidence in the House. Motions of censure are a less extreme measure that can put the Premier or minister under considerable public pressure. 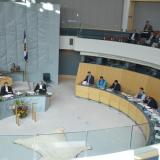